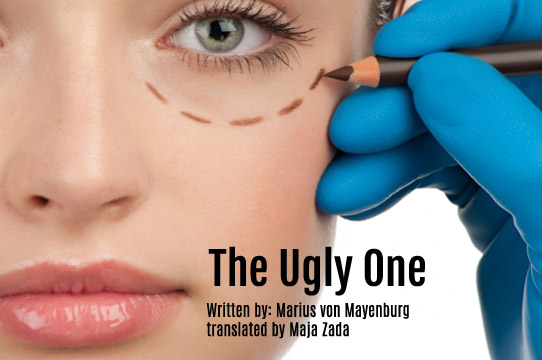 October 2015: Duck Bunny Theatre performed The Ugly One by Marius von Mayenburg, a scalpel sharp comedy on beauty, identity and getting ahead in life.

The show played a short season in Nelson at The Nelson Musical Theatre Complex from October 2-3.
And also performed at The Playhouse Cafe in Mapua October 6-7.

The Ugly One had its British Premiere at The Royal Court Theatre, London in 2007 and has been well received by audiences and critics around the world ever since.

Using a precisely paired-down form where four actors play eight roles with no traditional scene breaks, the play tells the story of Lette, a successful engineer who is also unspeakably ugly. When a plastic surgeon restructures his face, Lette emerges from the operation an Adonis. His life changes overnight: women lust after him and men want to be him. But this dream life soon becomes a nightmare, as Lette’s surgeon begins to offer his face to anyone who will pay.

A delectable black comedy… I have not seen a more imaginative, inventive or disturbing theatrical vision. — Evening Standard

A small but perfectly formed play… delicious performances.
— The Guardian

Check out the theatrical play trailer (playler) we created to advertise the show.

For more information email us duckbunnytheatre@gmail.com or visit our facebook page.

Our Top Satirical Books we recommend for you to find... END_OF_DOCUMENT_TOKEN_TO_BE_REPLACED

Our Top Pop Cultural Satires we recommend for you to... END_OF_DOCUMENT_TOKEN_TO_BE_REPLACED

Our Top Satirical Plays/Musicals we recommend for you to find... END_OF_DOCUMENT_TOKEN_TO_BE_REPLACED