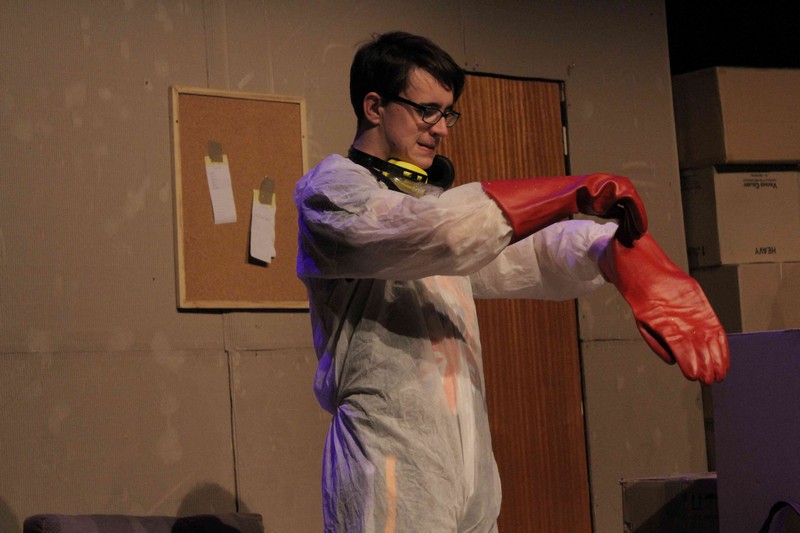 The Fridge is a Monty Python-esque black comedy which pokes fun at big corporations, greed and the childish notion that there is no such thing as too much.

A feckless, yet lovable everyman DOUG SMALL loses his job and scrounges for rent money to avoid being tossed out onto the street with his heavily pregnant partner FLORIN. Doug tries to get his job back from his boss, filthy-rich, egotistical bank manager TED BIGHORN, who is everything Doug is not and also happens to be besotted with Florin. Ted Bighorn offers to reinstate Doug and sweetens the deal with a cash bribe if he will walk away from Florin. Doug refuses and is mercilessly turfed out.

Doug is forced to go to the welfare office to find a job but leaves disappointed with an oversized cheque and a second-hand fridge. His luck finally changes when CARSON FORBES, a ruthless and business savvy imp appears from the fridge and reveals to Doug that the fridge produces mysterious golden eggs which he hopes will solve all of their problems. But instead Doug is seduced by his new found wealth and begins a moral decline.

Despite Doug buying lots of stuff to impress Florin, Carson convinces Doug that Ted Bighorn is making a more favourable impression on Florin and convinces Doug to confront him. This escalates into a series of stupid challenges which see Ted Bighorn and Doug deciding to steal a baby dolphin from an Aquarium to impress Florin and finishes with Doug spending a night in jail.

Doug makes a final desperate bid to outdo Ted Bighorn, which backfires and forces him to commit an act so absurd that it makes any other stupid things he has ever done in his life look smart by comparison.

Our Top Satirical Books we recommend for you to find... END_OF_DOCUMENT_TOKEN_TO_BE_REPLACED

Our Top Pop Cultural Satires we recommend for you to... END_OF_DOCUMENT_TOKEN_TO_BE_REPLACED

Our Top Satirical Plays/Musicals we recommend for you to find... END_OF_DOCUMENT_TOKEN_TO_BE_REPLACED