Duck Bunny Theatre is a small but feisty theatre company for those who love theatre fresh and lippy. Duck Bunny uses humour to satirically comment on everything from the absurdity of contemporary society to stupidity, greed and corruption.

Duck Bunny is a group of theatre artists focused on performing satirical works which make explicit the ridiculous that is hidden in plain sight. We bring to the stage exciting, insightful texts written by established playwrights we admire, and also foster new talent and support emerging artists we believe in to collaborate, improvise, write, devise, perform and produce original work. 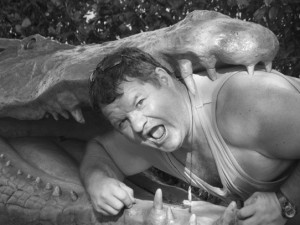 Alister has worked in the theatre industry for more than twenty-five years, both on stage and behind the scenes. He has spent four years working with The NZ National Academy for Singing and Dramatic Arts (NASDA) as Technical and Production Manager. While living in Australia he worked with Canberra Youth Theatre for four years where he was involved in the creation of works as diverse as Retrieval a promenade work at the National Library of Australia, and 35° 17 South an augmented reality theatrical experience at the National Gallery of Australia.

His theatre skills include; directing, lighting design, sound and set design, dramaturgy and playwriting. He holds a Masters in Theatre Practice in Directing and has taught theatre making at both University and secondary school level, including being invited as a guest artist at Ohio Northern University. He has also worked for more than ten years in the corporate conference industry as a staging technician and an audiovisual producer where he has toured shows nationally and internationally.

Having returned to Nelson, NZ at the start of 2014, by day Alister currently teaches Drama at Waimea College and by night he is the Artistic Director of Duck Bunny Theatre. And on weekends he likes to mountain-bike, whitewater kayak, tramp and rock climb, when he is not locked in a dark theatre somewhere.

For a look at a selection of recent theatre projects check out the portfolio at www.alisteremerson.com

ACTORS WE’VE THE PLEASURE OF WORKING WITH

SUPPORTERS WHO MADE OUR WORK POSSIBLE

The Playhouse Cafe and Restaurant

Our Top Satirical Books we recommend for you to find... END_OF_DOCUMENT_TOKEN_TO_BE_REPLACED

Our Top Pop Cultural Satires we recommend for you to... END_OF_DOCUMENT_TOKEN_TO_BE_REPLACED

Our Top Satirical Plays/Musicals we recommend for you to find... END_OF_DOCUMENT_TOKEN_TO_BE_REPLACED